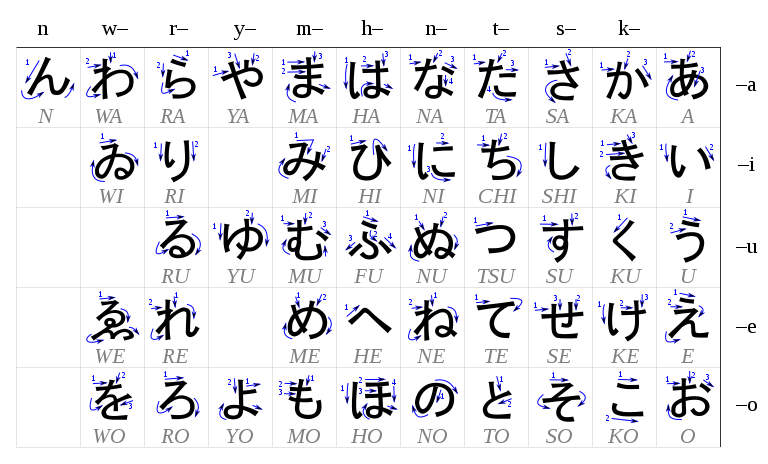 At your current point of studying, almost all of your time should be spent committing hiragana to memory, as it’s a lot easier to progress if that’s done first. While learning grammar, vocabulary, and kanji, the hiragana practice will happen anyways, as long as you don’t handicap yourself by relying on English transliterations. With that said, this lesson, we’ll cover some of the remaining concepts surrounding how kana functions and learn some basic greetings.

Unfortunately, Kana aren’t entirely consistent. You may have noticed that there are four kana on the chart that don’t align properly with the vowel and consonant combination that the surrounding kana might suggest. These four are ふ (fu instead of hu), ち (chi instead of ti), つ (tsu instead of tu), and し (shi instead of si). Make sure not to get tripped up by these minor differences!

*In the case of づ/ず and じ/ぢ, these characters originally represented different sounds, but now are pronounced identically. In general, because of a language reform in 1946, ず and じ are the default, but it’s helpful to know how づ and ぢ are pronounced for the few times you’ll run into them.
**H and F have yet another exception – an additional type of dakuten. The alternate dakuten is written as a circle instead of two lines, and causes the kana to be pronounced with a P sound (i.e. は→ぱ)

Since Japanese is not a relative of English, words as common as greeting phrases almost never have easy 1 to 1 translations. Rather, it’s more helpful to learn when they’re used independent of English.

いただきます (itadakimasu) – Sort of like “Bon Appétit”, one says this before a meal.
ごちそうさま (gochisousama) – One says this after a meal. As far as I know, no such word is common in English. One may add でした (deshita) to the end for extra formality.
ありがとう (arigatou) – Thank you. Add どうも (doumo) to the beginning or ございます (gozaimasu) to the end for extra formality (although generally one doesn’t add both at once)
いってきます (ittekimasu) – Goodbye (said when leaving)
いってらっしゃい (itterasshai) – Goodbye (response to ittekimasu)
ただいま (tadaima) – Hello (said when returning home)
おかえり (okaeri) – Welcome home (response to tadaima). One can add なさい (nasai) to the end for additional formality.

What to do before next lesson

Study the kana associated with S, T, and N. (さしすせそ、たちつてと、なにぬねの). The next lesson will contain a little bit more information on how to read kana and some practice vocabulary. One lesson after that, armed with vocabulary and literacy, you’ll be ready to learn about forming sentences.